You are at:Home»Uncategorized»Tips for Influencers: The Case of Elle Darby and White Moose Cafe

To use or not to use influencers, that is the question. In light of the case of Elle Darby versus White Moose Cafe, the question of the value of influencers has been thrown into the spotlight again especially among hotel, travel and hospitality PR practitioners and brand owners.

“We have successfully collaborated with celebrity influencers over the years,” says Elaine Seah, Managing Director of Brand Incorporated (Brand Inc.), “and we strongly believe in the value a right influencer can bring to a brand.” So exactly what has gone wrong? After all, the rather popular 22-year-old beauty and fitness influencer has 87,000 Youtube subscribers and 76,000 Instagram followers. Here are take and tips for influencers.

“Her audience, her posts, her genre and her persona are precisely the issue,” comments Elaine. “When we get a request for a sponsored stay, there are two key elements we look for – traction and relevance.”

While social media is a number game, let’s face it, there are real numbers and fake ones which Shed at Dulwich has proven. Although we are mindful of this, perhaps no one is as good as Xiaxue in sniffing out what is fake.

“To put forth a request without fundamental research into the brand positioning of a prospective sponsor is really just inviting rejection. In fact, I would even call it business unsavvy. Bearing in mind that Ms Darby terms her vlogging endeavour as a business from home,” analyses Elaine.

The trick here is to find a niche so strong that it is hard for publicists or brand owners to decline. “Make it hard for sponsors to decline. Know your brand and your audience. That’s my tip to budding influencers. Really, if you are running a business – home or enterprise, it’s marketing 101 you must know.” 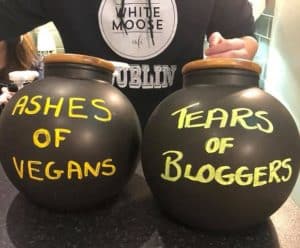 Had Darby bother to research, she would have known that Paul Stenson, owner of White Moose Cafe and Charleville Lodge, stirred the news when he famously banned vegans from his cafe in 2015. And he has yet again savvily shown that he is most willing to take on another challenger.

To be honest, we are not certain if starting an email request with “Hi there” helps. Consider making a good first impression. For us, formality from an influencer is the least we look for but we cannot speak for all. Certainly, it may rub some people the wrong way. Our take is that it is never too much to show some basic courtesy and sincerity.

Although Stenson was not shy to return the courtesy with “Dear Social Influencer (I know your name but apparently it is not important to use names)“, we get where he was coming from. 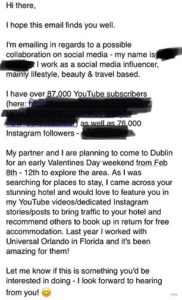 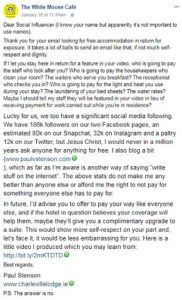 “Make an effort. Express why you are interested in the brand,” shares Elaine. “I still can’t decide what’s worse: asking unabashedly for an unreasonable amount of complementary products and services, or living in a self-entitled bubble over assuming the value irrelevant followers can bring to a totally unrelated brand.”

Yes, we agree that Stenson could have dealt Darby’s request with more tact. But to be honest, we would not have known who made the request had she not come out publicly and cried in her vlog for 17 minutes, which we found excruciating to follow much less sit through the entire drama. It was a shocker!

To name a few, we have worked with Ayumi Hamasaki, Franck Mesnel, Samantha Katie James and Dave Broom, and developed publicity programme for over 10 hotels under Accor Hotels and Far East Hospitality – leading hospitality management group in Singapore, we would be surprised if any brands dare to take the risk to work with Darby in the future. What’s worse, she has brazenly posted her second ‘victimised’ 10 minutes rant.

If any influencer wants to see his/her endeavours as a business, one word of advice: Be gracious. Everyone gets rejection sometimes. Not everyone panders to our wishes – yours, mine or anyone. But that’s okay. It’s just part and parcel of life. Everyone gets that. Being gracious pave roads for future opportunities. Burning bridges and soliciting sympathy are just … digging your own grave.