The world witnessed history. A US president met with North Korea’s leader for the first time in Singapore. Termed as the Trump-Kim Summit, many brands put on their most creative caps to give a shot at capturing international media attention.

The summit was regarded by many as the first step towards denuclearisation. It was a hopeful leap forward in the peace-making efforts for the Korean Peninsula. Although the event was set in a limbo after Trump pulled out just two weeks before the event (only to reinstate it one week later), it did not stop brands from creating the best publicity spins in the shortest notice.

Here are our favourite picks!

The award for the most creative stunt for this summit has to go to Vybes. Trump and Kim impersonators under Vybes paraded the streets and posed with fans for a fee of SGD10 per photo. 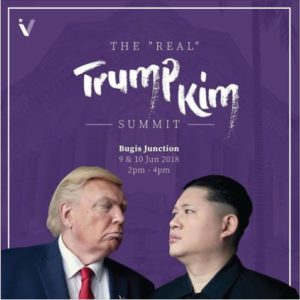 The impersonators’ uncanny appearance and the hype of the unprecedented political milestone drew huge crowds over two days in the lead up to the summit. This fun and creative spin was splashed across social media. It also made its rounds in many national and international media. Their appearance was accompanied by a call-to-action signage #GetVybes.

Way to go, Vybes! What fun and novel way to mark the occasion (and of course to engage the public and place your mark … everywhere)!

It was indeed nerve-wrecking when Trump penned an official letter to Kim to call off the highly anticipated summit, shortly after it was announced. 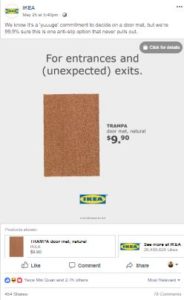 IKEA took the opportunity to place a post for an anti-slip doormat (cleverly branded as TRAMPA) on its Facebook page. The post poked fun at the swing decision between the two parties. And it also proposed an elegant solution: a 99.9% sure anti-slip option “for entrances and (unexpected) exits”. Simply brilliant!

We have to give it to IKEA: They broke the internet yet again (remember Frakta-Balenciaga showdown?). The king of flat-pack is always in for a good dig and lots of fun.

If you think it takes big budget to be creative, think again. We simply love how WOLF Burgers took on the big boys in getting attention at this summit. 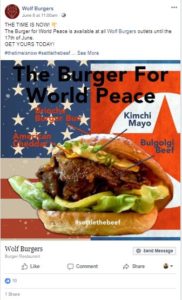 This humble but forward gourmet burger joint created a burger just for the summit. Named The Burger for World Peace, it had specially created bulgogi marinated beef patty accompanied with American cheddar. It was also topped with secret kimchi mayonnaise and served in a brioche burger bun. What is Singapore without the mishmash of Eastern and Western cultures and food? 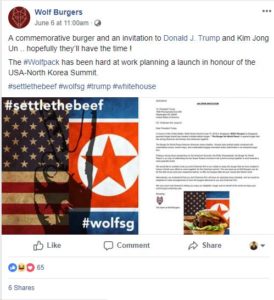 WOLF Burgers even took a step further and posted an open invitation letter addressed to both leaders on Facebook. We give the people behind WOLF Burgers credit for their ingenuity and sincerity on top of their really yummy burgers in Pasar Bella at Suntec City. If you have not been there, you should.

With more than 2500 reporters, journalists and news producers from all over the world in Singapore to cover the summit round the clock, the International Media Centre at the F1 Pit Building was also a great venue to showcase brands and delights we proudly call Singaporean.

Although businesses around the special gazetted area reported a drop in sales by as much as 70%, creative marketing spins have allowed local businesses to take the international stage and capitalise on the high profile event.