You are at:Home»Insights»Industry»Medical Tourism & Public Relations: More Than Meets the Eye

With medical tourism becoming increasingly competitive, governments and companies need to continue to strengthen their brand communications and publicity to increase their share of the expanding market.

According to 2015 Asia-Pacific Medical Tourism Outlook published by Frost and Sullivan, medical tourism in the Asia Pacific region recorded a US $9.62 billion revenue. The industry is forecast to grow 16.3 percent year-on-year by 2019 [1].

The double-digit growth has been speculated to be mainly contributed by emerging markets such as Malaysia and South Korea on top of established ones like Singapore, India and Thailand which already accounted for more than 75% of the worldwide medical tourist visits in 2015 [2]. According to a statement released by the Malaysia Healthcare Travel Council in early 2017, the Malaysian medical tourism industry has been experiencing a significant compound annual growth of 30 percent [3].

Medical Tourism Index 2016 published by the International Healthcare Research Center reported that Singapore came fourth among 41 medical tourism destinations while ranked third in terms of environment of the destination, surpassing other popular destinations on the list [4].

The assessment and ranking criteria of the Medical Tourism Index are based on the destination’s performance in three different aspects: destination environment, medical tourism industry and the quality of facilities and services. 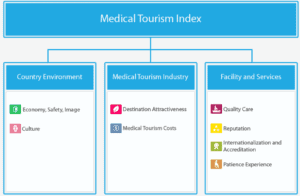 While Singapore still enjoys its long-standing status as the top preferred destination for patient experience and complex procedures, it has been ranked least favourably in terms of costs among other Asian countries as its neighbouring competitors increased their capabilities to offer quality care at much more competitive prices [5].

With the regional market becoming increasingly competitive, on top of finding a competitive advantage in their offerings, healthcare providers and governments continue to strengthen their branding and communications to increase if not retain their share of the market. However, medical and pharmaceutical public relations is usually easier said than done. Here’s why: