You are at:Home»Insights»How Does PR Navigate in an Opinionated World

Let’s face it, in the world we live in now, managing perception is at its toughest yet. The Internet has given voice to anyone with a smartphone and data. We live at a point in the timeline of human history where access to knowledge and misinformation (euphemism for fake news) is increasing barrierless. There is no time like the present in human evolution where we record and share an unprecedented amount of info on our daily lives (which, in all honesty, are immemorable and mostly unimportant, thanks to social media).

If we are to put things into perspective, social listening plays a part of our every day as publicists. Deciphering trends and preferences in a society where everyone is entitled an opinion requires experience and skills. Are we really listening or simply tuning in to the voice of engaged audiences (another euphemism used. Trolls included.) who are hyperbolically conferred more influence over the silence of an indifferent majority. So, how exactly do public relations practitioners navigate in such an opinionated world?

Recently, the children’s movie, Peter Rabbit has come under fire for a scene that is apparently making light of people who suffer from allergies. In the said scene, Peter Rabbit and his friends are attacking the movie’s antagonist, Mr McGregor by throwing blackberries at him. Mr McGregor who is very allergic to blackberries, starts choking and even has to give himself to an epinephrine injection.

Groups such as The Kids With Food Allergies Foundation demanded an apology from Sony Pictures and that serious food allergies should not be taken lightly and depicting “allergy bullying” even in a cartoon/animation should never be allowed. Sony eventually did release a statement stating that “Food allergies are a serious issue. Our film should not have made light of Peter Rabbit’s arch nemesis, Mr. McGregor, being allergic to blackberries, even in a cartoonish, slapstick way. We sincerely regret not being more aware and sensitive to this issue, and we truly apologize,”

On the other hand, an article on Forbes reasonably brings up that Sony should not have apologized and that the reason why so many people are complaining is because they have taken the scene out of context and media outlets blowing it out of proportion. The writer of the article, Scott Mendelson, mentions that the scene is vital in Peter Rabbit’s character arc as he starts to realize that he is not the “good guy” and this eventually leads to Peter Rabbit to realize the error of his ways and selflessly embark on a journey to make things right for all parties. Scott Mendelson also mentions that this is nothing new to storytelling and that if we continue to be offended at the actions of onscreen characters, it will eventually lead to the end of conflict and character development in any mainstream media.

So who is in the right here?

Not so cool now, H&M 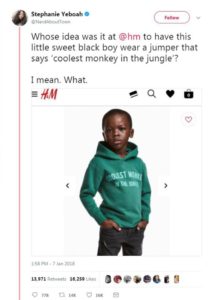 In another case of public apologies, H&M just had to apologize after an advert of a young black boy wearing a jumper with the tagline “Coolest monkey in the jungle”. It’s a wonder how the ad managed to slip through management and quality checks but H&M paid dearly for it.

The ad and even the jumper itself has been taken down and removed. Terry Mango, the mother of the young boy even mentioned in an interview that they had to move house in the wake of the controversy. Hip Hop artiste, The Weeknd came out saying he will never work with H&M again.

In this scenario, due to the sensitive nature of the controversy, H&M can do very little to control the damage. They have done what they could do with all their apologies but it seems that too much damage has already been done. Time will tell how much effect this controversy will have on the state of the company 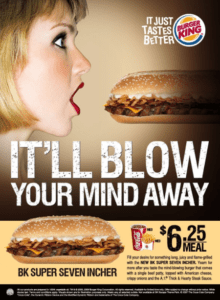 Closer to home, a local creative agency came up with suggestive ads for Burger King in 2010. To be fair, the brief must have come from the franchisee in Singapore and the ad may have worked in some countries that are more tolerant to tongue-in-cheek creatives. A whopper campaign flop, especially in a nation that has tweens and teens checking into fast food joints after school, Burger King received complaints that the concept was tasteless. Matters got worse when the model came out and claimed the poster was done without her consent or knowledge. Burger King saw sales dip after the campaign faux pas.

Of course, it’s always helpful to run through any creatives with the PR company to manage perceptions. Looking at the demographics and composition of the consumers of fast food in Singapore, such communications malfunction should not have been avoided quite easily.

PRoTips: There is no such thing as offensively funny. If it it offensive – bearing the forbidden -ists, it is best to rethink your strategy or consult a local PR agency. Remember, what goes on the Internet, stays on the Internet, forever.

This part is actually both complicated and simple at the same time. Ever seen an ad so bad or obtuse you immediately think to yourself, “How did a team of marketing and communications professionals pass this, let alone come up with it?”. Well, that’s because taste is subjective, or maybe someone just did not do their due diligence to proofread or fact check. 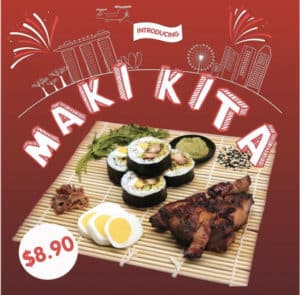 Makisan tried to play a pun on the first two words of the Singapore National Anthem, “Mari Kita”, for their National Day promotional ad this year. Using the first four letters to represent the brand and “Kita” which means “us” in Bahasa Melayu, Makisan immediately became the nation’s laughing stock when the ad was launched.

Makisan’s was a case of really trying too hard (and being too smart) for their own good without crosschecks. What Makisan’s ad literally means in the Malay language is “insult us”: “Maki” means “insult” and “kita” means “us”.

Fortunately, Makisan was quick to respond. The ad was immediately removed and an apology for the genuine error was issued on the same day. Were they embarrassed by the whole ordeal? Probably. Did it get more eyes on the promotion? Definitely.

PRoTips: While it is important to appeal and assimilate to the cultural practices and understand the vernaculars of a country where the business operates, it is critical to always run through checks if a foreign language is to be used.

Of course, we like to think that bad publicity is the worst to happen in our highly controlled campaigns and carefully-crafted messages, but apparently, it did not stop dotards from winning the election, and yes, The Onion’s Sexiest Man Alive 2012, still poses a threat to world peace.

It all boils down to knowing what the end game is. If you want to make some noise and have nothing to lose, by all means, go controversial. In our world that is saturated with content, it is hard to stand out from the competition unless there is a brilliantly different angle. 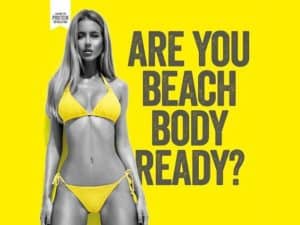 Protein World’s ad, for example, drew a lot of flak due to what was perceived as fat shaming. Some of the posters were even vandalised.

It was, however, the outrage and drama that drew attention to Protein World. The whole communications “fiasco” tripled sales and gained 5000 new customers. Sure, it will be nice if all corporate citizens play their part to be sensitive and inclusive. But let’s face the fact: Dreams sell. Protein World may have made enemies along the way but in the end, the bottom line speaks for itself. Their communications department even got a nice bonus!

It isn’t easy but finding that right amount of controversy will definitely help boost communications efforts. Take a good look before you leap. Like the saying goes, “you can’t make an omelette without breaking a few eggs” but if you break those eggs too hard then all you will get is egg on your face.